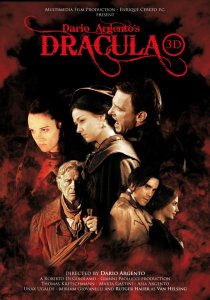 Woof. Where to begin on this one.

Its no secret that Dario Argento is one of the most legendary directors in the history of the horror genre. Helming such classics as Suspiria, Deep Red, Tenebre and more, there was a time when it was believed the man could do no wrong.

Alas, that time has passed. Argento‘s directorial output for the past two decades has been a mixed bag to say the least. Many argue that he actually hasn’t made a good film since Opera in 1987. When it was announced that he would be taking the helm of a 3D version of Dracula, many fans believed this could be a return to form, while others feared that he would be driving another stake into the legendary bloodsucker.

Sadly I must admit that not only is this not a return to form for Argento, but this may be the worst film of his that I have seen. The acting is atrocious, even by Italian horror standards. Normally you can at least rely upon Dario’s daughter Asia to be a bit of a highlight, but even she is dreadful and as stilted as a deck board. Thomas Kretschmann as Dracula makes Leslie Neilsen‘s spoof of the Count in Dracula: Dead And Loving It feel authentic and Oscar worthy by comparison. What may be even worse is the fact that his accent seems to change as the film progresses.

With the atrocious thespianism on display, one spends the entire time hoping that once Rutger Hauer shows up, he will help salvage the mess that is this film. Sadly, Hauer seemed more intent on lowering himself to the level of everyone else on set. While still better than the rest of the cast, not much can be said for his performance.

But of course, not many people see an Argento flick for the wonderful acting, but for his stylish direction and his masterful framing of murders. This may be where the ball is dropped the worst. The vivid colors that you expect from the acclaimed director are nowhere to be found, leaving us with a drab landscape. And as for the kills? These do not even compare to what we have come to expect from the one-time Master of Horror. When possibly your most iconic shot is a mans head being bisected by a shovel, of which it is cut away from almost immediately you are in trouble. I would also be remiss if I didn’t mention the absolutely atrocious CGI. I have always been a fan of practical effects but can understand that there is a time and place for computer generated effects. But these ones are some kind of awful, many looking like they were designed by a five year old in Microsoft Paint.

The one thing I can gladly say is actually on the positive end of the spectrum is the score by longtime collaborator and legendary Goblin member Claudio Simonetti. While this would definitely not rank alongside his more famous works (the Suspiria soundtrack is still one of the most eerie and terrifying scores one can listen to) it is clear that he still has a handle on making powerful music that works alongside the films.

Final Thoughts
While the idea of a legendary director taking on one of the most iconic horror characters in history may have sounded good on paper, we have ended up with a film so far removed from good quality that it doesn’t even fall into the “so bad its good” style of film. And what the fuck was with the giant praying mantis?