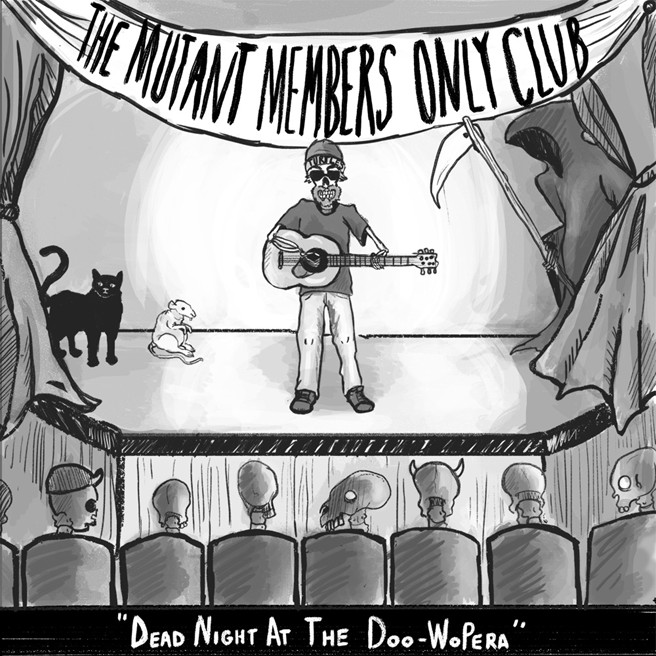 And now for something different. While the bulk of horror-based music falls into the punk, rock and metal genres, there are times where the darker side of life infiltrates into other genres that may be less expected. A perfect example of this would be Harley Poe, the semi-famous horror folk band. I can only assume that The Mutant Members Only Club took a bit of inspiration from them, when he created an amazingly humorous blend of doo-wop style music with genre undertones.

I became enamored with the band earlier this year, when I discovered through Bandcamp.com their intriguing style of music. At the time the band was known as Retards With Rayguns, a name that will certainly grab your attention if there ever was one. Upon researching into the band as I generally tend to do when I discover a new band, I discovered that the band is actually a simple one man project. Hailing from the state of Maryland, Tom Ihle created some of the most fun tunes I had heard in several years with just an acoustic guitar and his vocals. After some controversy, Ihle made the decision to change the band name to avoid further problems with the band name, dubbing himself The Mutant Members Only Club and celebrating the name change by releasing a new album.

The first thing we should get out of the way is that, while the band name was changed to avoid controversy and offending people, the song titles kept their same tongue in cheek style, not being afraid to offend, and the lyrics always go along well with their titles. Where else can you find a song with a name like I Lost My Virginity At Your Funeral?

Given that this is a one-man project, the production value is rather stellar, but that should also be expected since it’s just a guitar and vocals. The album begins with a spoken word intro giving you the impression of sitting in a theatre for the ensuing one man show, before launching into the aforementioned I Lost My Virginity. If this is your first time listening to the band’s work, it is possibly the perfect song as an introduction. It takes their wonderful rendition of doo-wop, and mixes it accordingly with the horror genre, and as the band puts it on their Twitter account bio, “dick jokes”. From there it goes through a few more songs mastering this humorous and horrific blend, before we arrive at the Intermission. They give a shout out to their former band name before getting back to the trend at hand.

The songs all flow well together creating a solid album all around. Late in the album we get a song that will tug at the heartstrings of any late 80s/early 90s child. Do You Remember makes reference to everything from Creepy Crawlers to Goosebumps through Are You Afraid Of The Dark and the original Mighty Morphin Power Rangers with the absolutely hysterical line “the Pink Power Ranger gave me my first boner”. A line that will surely resonate with any boy growing up in the early to mid 90s. After this the album moves onto its Outro wrapping up a seriously fun laid back album.

If you are looking for something fun and easy to listen to while also getting your musical horror fix, you can’t really go wrong with The Mutant Members Only Club. Definitely take some time out to grab one or all three of their available albums, it’s something you surely will not regret.

You can check out The Mutant Members Only Club on Facebook and grab their albums at their Bandcamp page. The albums are available for free or any cost you wish to donate!

2 thoughts on “Stereo Terror: The Mutant Members Only Club – Dead Night At The Doo-WoPera”