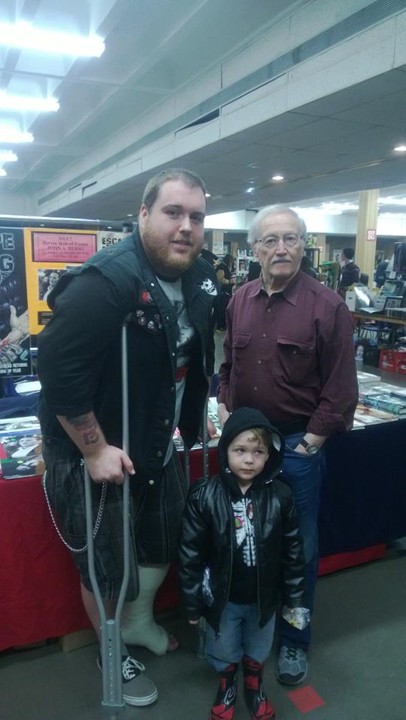 Myself & my eldest son Dexter with the co-creator of Night Of The Living Dead John Russo at Shock Stock 2013.

The horror genre is an interesting one, despite what others may say. It is arguably one of the longest running film genres, with Thomas Edison‘s 1910 rendition of the classic Frankenstein being one of the very first films ever recorded. Many people regard the genre as a strictly adult affair, although after the slasher boom in the 1980s many horror films have also been marketed directly towards teenagers. But there is another almost subgenre that can be found, and that is of the kid-friendly horror movie.

As a father of two who also happens to be a self-proclaimed horror fanatic, it can be difficult to correctly pass on the love of the genre while also ensuring that the children are not exposed to things they should not be. It is clearly a given that you should never allow a child under the age of 15 or so a movie directed by the likes of Lucio Fulci. That is the kind of thing that can scar a child.

I’ve had several people comment to me that children should not be exposed to horror at too young of an age, and I strongly disagree with this sentiment. Yes, when my first son was born, I happily tell people that the first night he was home he sat on my lap and we watched Friday The 13th Part VI: Jason Lives. He knows who Jason Voorhees is, as well as Freddy Krueger and Michael Myers, just as most kids do. But once he hit the age where he and my youngest son began to recognize what they were watching, I made sure not to watch these types of films around them.

I feel there is a distinct difference between the children knowing who these characters are, and the way they can be exposed to them. In our home, I have several action figures of horror characters, ranging from Jason and Freddy to Pinhead and the Djinn from Wishmaster. My children have joined me at the annual Shock Stock convention. One of the happiest days as a parent was my eldest son Dexter being excited to meet Kane Hodder, the man who played Jason Voorhees on four separate occasions. He was not scared, and actually asked him to sign a toy machete that came in an old Jason Halloween costume. Even at the age of 2 and a half at the time, he was able to differentiate that who he was meeting was a man that played a character, but he was still excited, and I was incredibly proud of him. In fact, he still refers to Centennial Hall, the venue that Shock Stock takes place at, as “Jason’s House”.

Showing a child under the age of 10 a film like A Nightmare On Elm Street is going to scar the child. Granted, every child is different and will respond to what they are viewing differently. While a child raised around the genre and taught that it is fiction will be better understanding of everything, some are not brought up around it. There have been times where I come into the room and do find Dexter watching a Friday The 13th movie on Netflix, as he understands that it isn’t real and knows that Jason is a character played by an actor, in this case, one he has met. This is not encouraged, but sometimes as we all know as parents, kids get around to things whether we want them to or not. He also plays “Zombies” with his younger brother. It is certainly a delicate line to straddle, as we want to embrace their love of the genre, while also being responsible parents and not exposing them to things they should not see.

When I set out on this article, it was going to be a one and done article talking about kid-friendly horror films. But as I write, I have realized there is so much more that can be discussed with this. So this is going to actually become a new feature that can be expanded upon, possibly even with the help of my sons.

There is much more kid-friendly horror than even I thought off the top of my head. I started compiling a few in my head and then realized there are so many more that even one article could not adequately cover it.

While at the time of their original release they were considered quite horrific, I think it would be safe to say that any of the classic Universal horror films now fall into the realm of horror films that are appropriate for young children.

Going forward, horror films that can be considered kid-friendly will be reviewed in a new feature called Parental Guidance by myself with the help of my children. Here are a few films that may be covered in the future under this headline, and of course, any suggestions are always open by commenting here or leaving a comment over on our Facebook page

Stay tuned for this new feature.