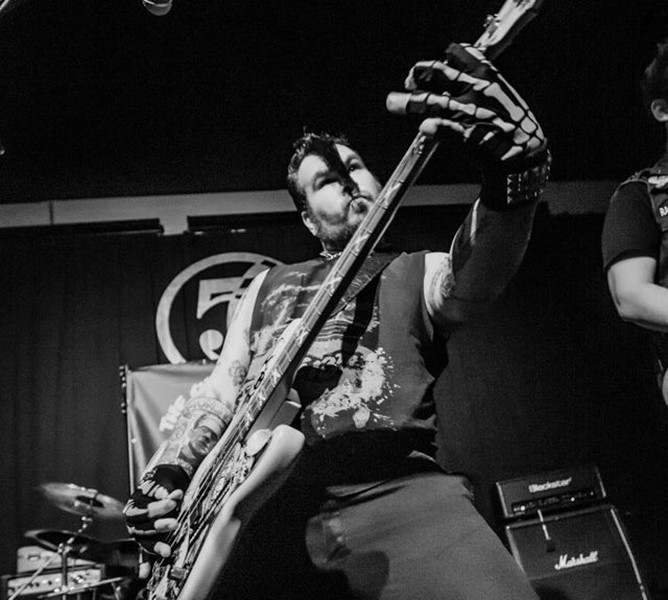 While the horrorpunk genre is certainly one bonded with the underground, there is definitely no shortage of bands within it. And as with any genre, whether it be music, film, literature or anything really, there are obviously good ones and ones that aren’t so good. Thankfully, our beloved genre of music has more good than bad. And one of those great bands is Ohio’s own The Suicide Ghouls.

I first started listening to them back in 2011, and they have had regular playback on my stereo and headphones ever since. Whether it be their full-length album We Put The Fun In Funeral or their EP Rock’N’Roll Halloween, The Suicide Ghouls do a great job of hammering out fun and super-catchy horrorpunk music. After a few years with no new releases, the band is preparing to unleash a new album. So without further ado, let’s get to the interview with Tyler Toxic!

Who are you?
Evil. Pure unfiltered evil. AKA Tyler Toxic of The Suicide Ghouls.

What is your current project?
The Suicide Ghouls is my main project right now. We’re currently waiting for the final artwork for our second album, Love Songs For The Recently Deceased. It should be available soon.

What first got you interested in the horror genre as a whole?
It’s hard to say really. I remember watching Burton’s Batman and Beetlejuice when I was three or four years old, and they were my favorite movies as a kid. I’ve been kinda magnetically drawn to dark movies since. Anything with blood, guts and gore will catch my attention.

What are some of your favorite horrorpunk bands?
Ahhhh, this question….haha. Well, the obvious (and generic) answer, The Misfits, Blitzkid, Groovie Ghoulies, Murderland, The Casket Creatures, Graveyard Boulevard, Spawn Atomic, seriously, the list can go on and on…. Especially if I group my favorite psychobilly bands in too.

What about bands that don’t fall under the horrorpunk umbrella?
This may get weird. NOFX, Screeching Weasel, Alkaline Trio, AFI, AC/DC, The Queers, Bootsy Collins, Johnny Cash, The Weakerthans, The Addicts, Social Distortion, and of course, a hell of a lot more.

What are your favorite horror movies?
The ENTIRE Halloween franchise (pre-Zombie), Psycho, Dementia 13, Suspiria and Air-Bud.

What are some of your favorite non-horror movies?
Those exist?

What do you have planned for horror fans in the future?
Booty shorts with words on the butt, but realistic, like “Sweaty”, “Stinky” or “Vacancy”. Um, well, we’ll be releasing our album (finally!) after a bunch of nonsensical chaos has got in the way. We just lost our brother Jimmy, and got a new guitar player, which in our tradition means writing and recording about 3 or 4 new songs and releasing them around Halloween. We’ve been in talks with some other awesome bands about splits and comps, so we should have some surprises in store.

Now for free reign, anything you want fans of the site to know about?
We just updated our website, www.thesuicideghouls.com, so you should check that out. Also, support YOUR local scene. It’s your scene, own that shit! Thanks to The Deadhouse for chattin’ with me!

And there you have it, a look at the maniacal Tyler Toxic from The Suicide Ghouls! I’d like to thank Tyler for taking the time to chat with us. And you can all sure as hell expect that once Love Songs For The Recently Deceased drops, you will be finding a review here on The Deadhouse!

One thought on “Deadhouse Interview: Tyler Toxic of The Suicide Ghouls”