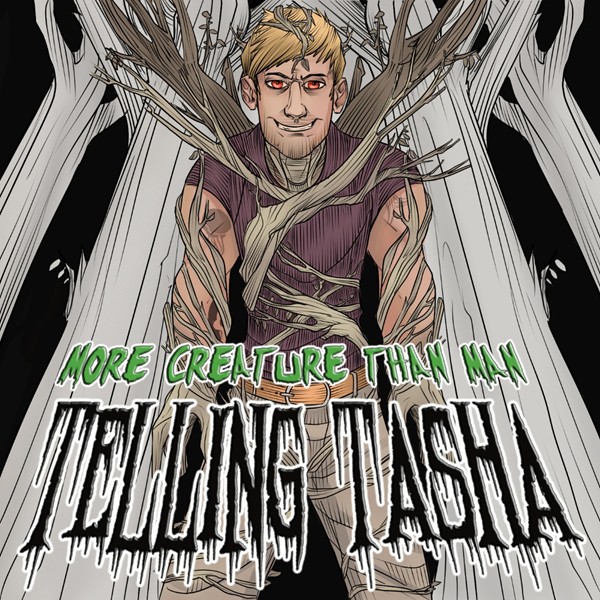 Acoustic isn’t always a type of music that lends itself well to horrorpunk. While sometimes turning a fast song acoustic can work (look no further than Blitzkid‘s Head Over Hills alternate rendition, or the live acoustic version of Nosferatu for great examples) starting acoustic from the start while also keeping a sense of what makes horrorpunk so great can be rather difficult. Evan Hill recently reached out to me to inform me of his forthcoming EP, More Creature Than Man under the project name of Telling Tasha. So, how would these five songs hold up given the difficult notion of blending an acoustic sound with our beloved genre?

Starting with October Skies, a hauntingly beautiful rendition about the greatness of everyone’s favorite month, you immediately discover that you are in for a treat. Starting the EP with Skies was certainly an intelligent decision, as it lets you know right from the get-go that you are in for a pleasant surprise with this album. The song serves to introduce us to the soothing sounds of Hill‘s voice and how well it meshes with the guitar.

The Ballad Of Odd graces our ears next and continues the sound you will be well acquainted with by the time the EP’s running length is over. While not as strong as October Skies, Odd serves as a great transitional tune from Skies to the next track, Cemetery Blues, which begins with the sound of distant rumbling thunder easing its way to the fastest song on the EP.

Up next is a special track, for me at least. Hill has chosen one of the greatest Blitzkid songs to cover, the amazing Mr. Gore. Just in case you haven’t figured it out yet, Mr. Gore is the song that helped inspire this writer’s alter ego. Given that Gore is one of my favorite songs ever, I was a little hesitant to first listen to this one. Thankfully, the song itself is a faithful rendition, with the acoustic vibe adding to the song. While nowhere near the level of the original track, it serves as a great example of the talent Hill possesses in working with his chosen sound.

The EP closes with the awesomely titled William Castle Is My Hero. For those of you unaware, William Castle was the king of gimmicks to help promote his films back in the 50’s and 60’s. It is also a great way to close out the EP, leaving you wanting more.

Overall, the sophomore effort from Telling Tasha is a nice diversion to the genre, given how at times many bands sound the exact same. By trying something a little different, the one-man project should easily find a devoted fan base. More Creature Than Man is a great effort, and my only real problem with the EP, is just that. I very much look forward to a full length in the future, and you should too!

You can check out Telling Tasha on the band’s Official Facebook Page and grab their first EP Frankenstein Unplugged on their Bandcamp page! Also be sure to bookmark it so you can go get More Creature Than Man when it is fully released on October 18th!