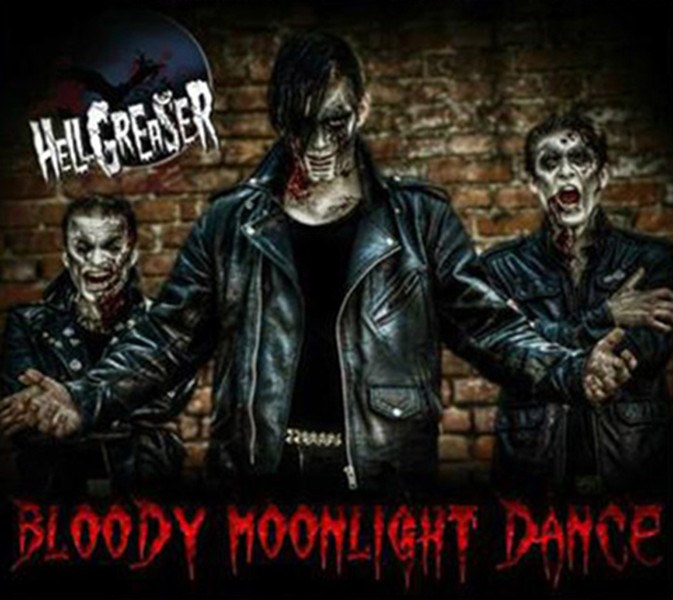 I have already divulged the greatness that is Hellgreaser back when The Deadhouse was first starting out. (Check out my review of The Humans Must Die here).

Back in 2013 the band released yet another slice of horrorpunk goodness, entitled Bloody Moonlight Dance. And as is always awesome, the band from Cologne, Germany continue the awesomeness from their Debut EP.

The album opens with the title track, which also served as the album’s first single. Guitarist and vocalist The Slaughter Lamb, bassist and backing vocalist Screaming Hairy and drummer Demon Machine have always sounded like a cohesive unit, and right from the opening guitar, you know that time has done them nothing but good. Bloody Moonlight Dance is ridiculously catchy based all around Lamb‘s catchy vocals. Following the opening track is Zombie Sex which is about, well, I think you can figure it out. The fact that the lyrics “her rotten vagina” are included and absolutely works within the confines of the song should tell you all you need to know.

Mother Of Them All starts with a killer bass line leading into not only the standout track on the album, but a serious contender for the best horrorpunk track of 2013. I honestly cannot even begin to try and figure out the amount of times that I have sat with this track on repeat since the album’s release in summer of 2013. Everything on this song just gels together perfectly, and capped by the vocals and the backing “whoa-ohs”.

The band’s tribute to everyone’s favorite hunchbacked lab assistant, Igor. Unlike most songs that pay tribute to our beloved horror icons, Igor tells the story of how the man came into the employ of Dr. Frankenstein. Moving from a classical character from the first Golden age of horror, the band switches their focus to another icon, from the 80s age of horror. Freddy Is Back pays great tribute to the Dream Stalker of Elm Street, and builds towards yet another super catchy chorus. Try listening to the song and not envisioning yourself screaming along with the chorus. If you can’t, you are on the wrong website right now!

At The Dark Graveyard is the requisite love song about the place where any true lovebirds go, the cemetery. Black Velvet is sadly not a horrorpunk rendition of the Alannah Myles pop-rock hit, but it is still one hell of a catchy tune. Closing out the album with a slow track, just like they did with The Humans Must Die, the song is about the resurrection of a lost loved one. It’s a fitting close to the album, and while not as strong as The Wolfman it still definitely does the trick.

At this point it is safe to say that Hellgreaser has completely solidified their sound, and I just can’t see much change to the formula coming in the future. And this is not a bad thing in the slightest, as once you master a specific sound and it works, why mess with a winning formula? I cannot wait for the band to release another album, as I can’t wait to hear how they blast ears worldwide with great, old fashioned horrorpunk.

Killer Track
Mother Of Them All