Skip to content
Silver Screams: The Woman In Black 2 – Angel Of Death
Horror

Silver Screams: The Woman In Black 2 – Angel Of Death 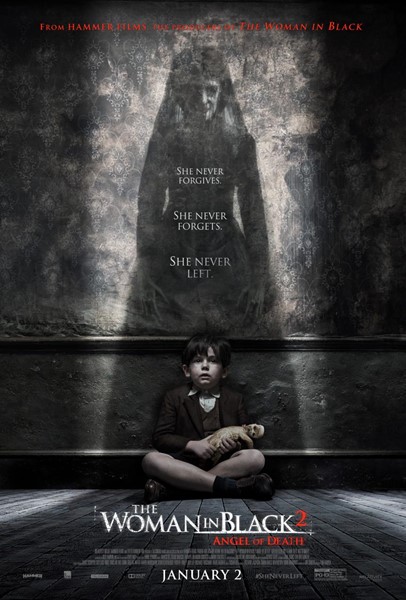 2012’s The Woman In Black was a moderately decent haunted house movie, most notable for starring Harry Potter himself, Daniel Radcliffe. To the best of my knowledge the film was by no means a blockbuster, but it must have made some semblance of profit, as Hammer Films has brought the titular ghost back for another go-round in The Woman In Black 2: Angel Of Death. While a horror movie sequel is not really news in any way, what is surprising is that this film has gotten a theatrical release. Not going to lie, the movie has all the trappings of a direct-to-video sequel, so when I saw that it was playing in theatres I figured what the hell. After all, horror is best when seen in a dark theatre with a crowd of people, if for nothing else then to laugh at people thrown off by the predictable jump scares. Sometimes the theatre experience can make a not-so-great movie seem like the greatest thing ever, as is my personal case of seeing Freddy Vs. Jason opening night in a sold out theatre where fights were almost breaking out over who would be the victor. So even a PG-13 paint by the numbers haunted house movie can become much more enjoyable.

Taking place 40 years after the original film, the plot of the film revolves around Eve Parkins (Phoebe Fox) and Jean Hogg (Helen McCrory) as two school teachers who move into the supposedly haunted Eel Marsh House with a group of children orphaned by the war. On the trip to the island where the house resides, Parkins meets Harry Burnstow, (Jeremy Irvine) a pilot who is stationed on the island during the war. While there are several children living in the home, the only notable child character is that of Edward (Oaklee Pendergast) who is a last minute addition to the class, and has gone mute due to his trauma. Of course this singles him out as the oddball amongst the other children, but he is soon taken under the wing by the titular Woman In Black (Leanne Best). Throughout the film a few of the children who cross Edward meet their untimely end, and we discover that most of the characters have more to them than meets the eye.

The biggest problem with The Woman In Black 2: Angel Of Death is how utterly formulaic and boring it is. The cast does the best they can with the wooden script, with Fox doing her best to carry the film on her shoulders. McCrory is also perfect as the old-school headmistress type character who is of course an unrelenting bitch to those around her, but comes around in the end. The film is littered with repeated jump scares in place of solid atmosphere. If there is anything a haunted house type film needs, it is to have a strong sense of dread, but over the past few years that has gone out the window in favor of easy jump scares. I attribute this mostly to the rise of James Wan and his Insidious films. While there is nothing wrong with a film having jump scares, using them in place of building a sense of foreboding is just lazy filmmaking. Whether this can be attributed to writer Jon Croker or director Tom Harper I cannot say, but one would think at some point they would stop and decide to put a little more effort into things.

Sadly, while many great horror films are relegated lately to the VOD method or direct to video (a perfect example would be Ti West‘s The Sacrament, which you can check out our review of here) theatres are still littered with boring and by the number films such as this or last year’s Annabelle (of which you can find our review here). It doesn’t seem fair, but these are the movies that make money, and unfortunately, the almighty dollar is generally the only thing that counts to the studios.

Do yourself a favor and skip out on this one, or if you really need to see the further adventures of The Woman In Black, wait for it to hit DVD and Blu-Ray.