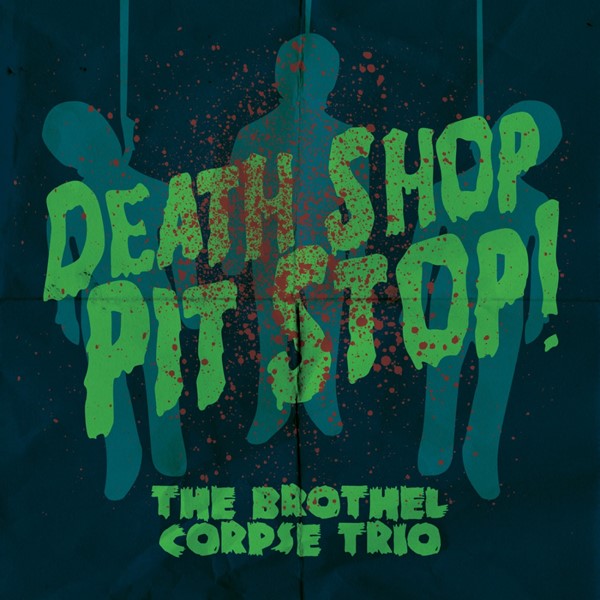 One of the beautiful things about music of any genre, is how universal of a language it can be. Even in our beloved genre of horrorpunk, we get bands from all over the world taking part and creating great music for people everywhere to enjoy. While Scotland has never struck many as a place where horror is prevalent, the Scottish three piece The Brothel Corpse Trio proves that there are those there with a love of horror and horrorpunk.

The band comes out the gate swinging with the infectious title track. Regardless of the fact that saying Death Shop Pit Stop! quickly is a tongue twister all its own, you will most certainly find yourself singing along by the time the chorus hits. Love Mattress is the perfect extension to the opening track. Big Ron is another ridiculously catchy track that you will surely be singing along to, as is Rebel! Rebel!.

With The Diseased, the band puts a new spin on the always fun topic of necrophilia. While most songs about sex with the dead focus on the act itself, The Diseased tells the story of a man who goes to see his doctor and is informed that he has contracted a disease from his actions. The band takes this novelty concept and runs with it, crafting a catchy as all hell song with a great singalong chorus. Moving on from necrophilia, the band next touches on Cannibalism. Unfortunately after the sheer greatness of the previous track, Cannibalism falls a little flat. Rebounding with the ballad-like Eyeball Pinball Machine gets the band back on track, leading into the breakneck-paced Stalker.

Three Piece Suit is another contender for catchiest song on the album, telling the story of a killer who likes to peel the skin off his victims and wear them around, a la Buffalo Bill or Leatherface. No To The Living! and Creep keep things moving briskly bringing the album to Devilboy, another fun quick track. As the album comes to a close, The Cannibal is another great showcase of the band’s particular sound, mending psychobilly and horrorpunk without leaning too far into one side. I should also point out that the vocals are very unique. Just like the band’s overall sound, it has traces of the psychobilly style, but never leans too far in that direction. The album wraps up with Four Man Gang Bang, which is about, well, it should be quite obvious.

The Brothel Corpse Trio are a unique entity, but one that I do recommend checking out for any fans of horrorpunk, psychobilly or tunes with a bit of a twisted sense of humor. Definitely check them out, you will not be sorry that you did.

You can grab yourself a copy of Death Shop Pit Stop! on their BandCamp page, and be sure to give them a like over on their Facebook page to keep updated with all the latest news about the band.