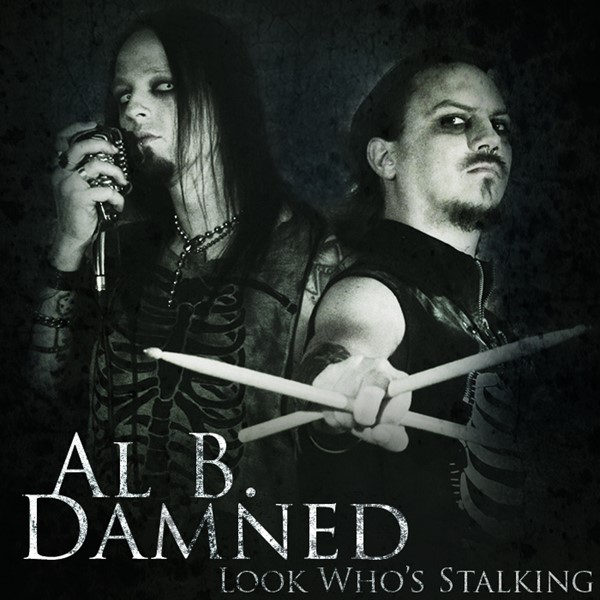 As the former frontman for UK-based horrorpunks The Texas Drag Queen Massacre, Al B. Damned has done rather well for himself. Forging ahead from the ashes of his former band, Damned released his first solo album, The Darker Side Of Me in 2010, followed by the free Seven EP in 2013 (which was also the very first Stereo Terror review ever featured on this site, and can be found here) before calling it a day on the project and launching a new metal project entitled Beneath Dead Waves. But the Al B. Damned project refused to rest in peace, and after a successful Kickstarter project in late 2014, it was announced that 2015 would see the release of a new album entitled For Old Time’s Stake. At the end of January 2015, the first single, Look Who’s Stalking would see a video release, followed by the release of a single featuring some bonus tracks.

Starting with the first single from the forthcoming album (that is, if you don’t count Never Sleep Again which was released as a one-off in 2014 but has been reworked and will be featured on the album), Look Who’s Stalking comes fast and furious, reaching for your throat and never pausing to let go. It may also be the hardest song that Damned has released under this project, certainly showing a bit more of a metal edge that was no doubt influenced by his time with Beneath Dead Waves.

Moving onto the B-side, Hyde & Seek is another hard hitting track, and somehow even bests the previous track in terms of catchiness. While I can’t quite put my finger on it, something about the track reminds me of the band’s output circa The Darker Side Of Me, with a slightly more metallic edge. In all honesty, I would not be surprised at all to find out that this song was originally written back in 2010 for that first album, and I don’t mean that as a slight in the least. Compared to the first track, Hyde & Seek seems to take things to the next level, and considering this was discarded from the album and used as a B-Side, I can only imagine how much that speaks for the quality of the album.

After two heavy and fast tracks, the band goes unplugged for a visit to the days of The Texas Drag Queen Massacre, with an acoustic rendition of TDQM favorite Bats Of A Feather (originally included on that band’s 2007 release Skele-Tunes). While the original song was always a favorite of the back catalog, hearing this acoustic version helps make the song even better. While never a hard track in the first place, stripping away all of the elements only served to strengthen the track, making it a stand-out on this small release.

Closing out the single is another version of Look Who’s Stalking, in this case the Warhead Remix. Starting with some assorted samples, the song then takes on a very techno-style feel. While not bad in and of itself, it does seem strange given how jarring the difference in sound is compared to the other featured tracks. To say this is something that never would have been out of place on a soundtrack to any action film of the early 2000’s like The Matrix sequels would not be a stretch. In fact, it has a very reminiscent feel to the nu-metal style that dominated the airwaves 15 years ago. It is good for what it is, but it still seems out of place, but that is what these types of releases are for, to throw out something different that can be taken or left.

Overall, the Look Who’s Stalking has done nothing more than make the wait for the full release of For Old Time’s Stake even more unbearable. The one-two punch of the title track and Hyde & Seek gives listeners a good idea of what to expect with the forthcoming album, and as I mentioned already, if the whole album consists of tracks like these, then fans new and old are certainly in for a treat when the full album sees release later this year.

You can grab yourself a copy of Look Who’s Stalking on all digital music stores like iTunes and Xbox Music, but I recommend grabbing it from the official Al B. Damned
BandCamp page as it also contains a bonus behind the scenes clip on the making of the new video, which I’ve also included below in case you have somehow missed seeing it. And as always, be sure to give a like over on the band’s Facebook page!