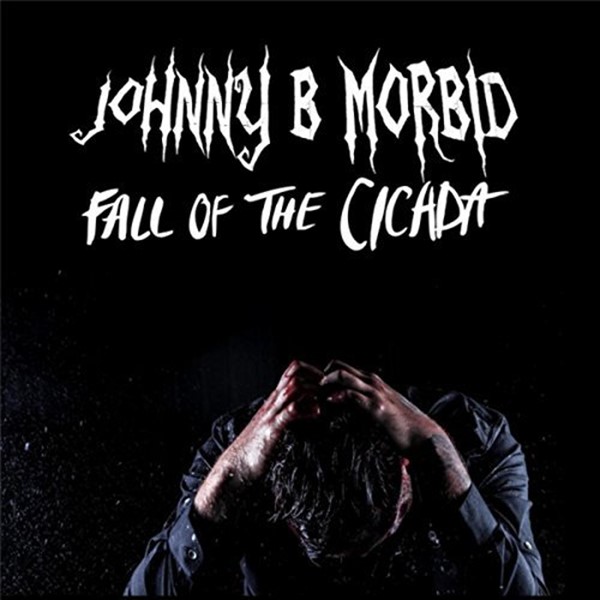 Johnny B. Morbid has been a solid part of the horrorpunk scene for several years now. We reviewed his last album Welcome To Die! which you can find here as well as a Deadhouse Interview with the man himself which you can also find here. So it goes without saying that I would be getting my hands on the band’s new release, Fall Of The Cicada.

Starting with True Believer the band comes right out the gate with driving guitars and drums. Morbid
sings “You and I will stand together, as we’re burning down the gates of Heaven”, immediately showing that there is no fucking around on this album. The song is all about standing by someone and showing them that they have the power and ability to keep going, no matter what they may think is stopping them. This level of positivity is something not seen in the genre frequently enough, and I have been listening to the song on repeat for some time feeling empowered. I have absolutely no issue saying this is my favorite track from Johnny B. Morbid since Formed To Fall on 2009’s Monsterpiece.

Before I Fade follows and merges with the end of True Believer masterfully. It’s done in a way that both songs seem almost as one. It continues the level of positivity from the previous track, and continues to show the growth Morbid has made through the years and his releases. With Crucifiction things get a little more serious as Morbid tackles the touchy subject of religion and the horrific things that are sometimes done in its name. The song also takes the album in a heavier direction by the time it comes to a close.

Exile continues the heaviness hinted at in the previous track. What’s exceptional about this track is that even though it gets heavier, it never sacrifices the melodicism. While Morbid is known for his backing position in several other acts, he has a remarkable ability as a singer and front man as well. Above And Beyond marks the halfway point of the album, and goes a little lighter than the previous track, but is a damned fine track, and is catchy as all hell.

It’s at this point that I should note the seemingly intentional step away from the horrorpunk genre found on the album. In no way should this be considered a slight against the album, as it is still a damned good album. As I have been preparing this review I have also been listening to the Johnny B. Morbid back catalogue, and it is quite clear throughout the years the level of growth undergone. And Fall Of The Cicada seems like the next evolutionary step for the man and his music. There was talk before the release of the album that this may be the final release from Johnny B. Morbid, and while speaking with the man himself he could not confirm one way or the other if that was still the case, if it does end up being the final chapter for the project, it is going out on a high note.

It Came From The North is another solid rock song that could easily be played on mainstream radio, but still stays true to the signature sound. The song is completely driven by the drums, and includes some death metal growls to help punctuate the point of the song. The final part of the album continues the positive theme that started at the beginning of the album. Through Future In Flames and Fear Itself you continue to feel the strength coming from the music. I cannot lie at all, listening to this album has made me feel more positive about everything in my life. The positive message comes through all of the album, and becomes even more strengthened by the time you get to In The Unknown and the title track, Fall Of The Cicada closing the album. As it has taken me pretty long to do this review due to life issues, I have found myself listening to the album more than I usually do for reviews here on the site. The closing of the album is simply fantastic, and I have found myself listening to the final two tracks on repeat several times.

The best way I can describe Fall Of The Cicada as a whole, is that Johnny B. Morbid has grown up. This album should make an impact on anyone who listens. I can’t really recommend this album enough. It is empowering, and despite the step away as a whole from the horrorpunk genre, this is definitely the album that Morbid needed to make.

You can get yourself a copy of Fall Of The Cicada from the Official Johnny B. Morbid site and be sure to give the Johnny B. Morbid Facebook page a like to keep updated on touring and other information.