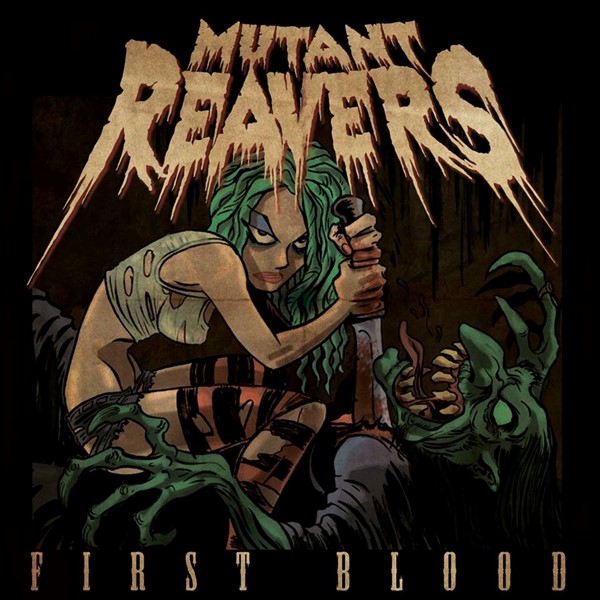 One thing I’ve learned since the inception of The Deadhouse in late 2013 is how worldwide the horrorpunk genre really is. I have been contacted by bands from places I never knew even existed (give me a break, geography was never one of my strong points during my school years!). Recently I was contacted by a band based out of Kiel, Germany. Given that my heritage is mostly German and Scottish, of course I was going to check them out. So I was more than happy to check out the debut EP from Mutant Reavers, entitled First Blood.

The band wastes absolutely no time smashing your ears right from the beginning of the EP with First Monsters On The Moon. The band embraces the harder side of horrorpunk, mixing in some of their metal influences as well. First Monsters On The Moon is based around the hook of the tagline of the 1979 Ridley Scott classic Alien, reminding anyone who dares to listen that “No one can hear you in scream in space”. The track works wonders as an introduction to both the EP and the band, informing listeners of what they are in for without wasting any time.

The band’s ode to my personal favorite film of all time, George A. Romero‘s zombie epic, Dawn Of The Dead, continues the in your face style that is clearly the band’s modus operandi. Fast drums and driving guitar riffs back up the strong vocals from the band’s front man Oli Wonka. The vocal style doesn’t have the typical horrorpunk or psychobilly style, giving the band a sound more unique to themselves. If I absolutely had to compare the vocals in any way, the closest comparison I would be able to suggest would be Alex Story of Cancerslug and Doyle. Regardless, it blends well with the band’s harder style and as I have already mentioned, works wonders in making the band’s sound their own.

The first few seconds of Alligator Man gives the impression that the band is going to slow things down, before settling into their normal style. The one-two punch of both Alligator Man and the EP’s closing track, Hellbound Hurricane hit hard and wrap things up nicely. If I was to throw out one complaint about First Blood, it would be that it seems like it is over far too soon. All four tracks pull you in, and then just like that it is over. Not necessarily a bad thing, as I can safely say that I am strongly looking forward to whatever the band releases next.

The band has released First Blood on their Official BandCamp page with the always delectable Name Your Price option, so there is absolutely no reason for you not to check out the album. Also make sure to stay up to date on all things Mutant Reavers by giving the band a Like on their Facebook page!

Killer Track
Dawn Of The Dead