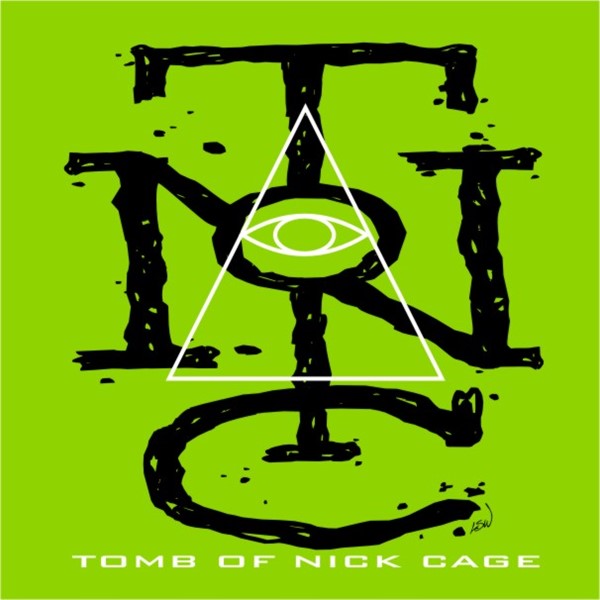 It seems rarely does a week go by that a new horrorpunk band crosses paths with The Deadhouse, and unless you are a completely horrible person with terrible taste in music, this is a damned great thing. One of the newest bands to emerge in the scene is The Tomb Of Nick Cage from New Orleans. In all honesty, I had never actually even heard of this band before they contacted me about taking a look at their debut EP. But as always, the mission statement of The Deadhouse is to help spread the word about bands both new and established, so I was excited to take a look into the band. If you’ve been paying attention then you know that The Tomb Of Nick Cage has already had songs added to Deadhouse Radio so that should immediately point as a sign that you are in for some good tunes.

The band, consisting of lead vocalist/guitarist Melissa Crory, bassist Sean Mooney, guitarists Aaron Maguire and Kevin Guillory and drummer Brian Peschelow (who all provide backing vocals as well) kick things off with Vampire’s Kiss, which serves as a perfect introduction to the band’s sound. It may be just me, but I immediately had a sense of the legendary 45 Grave, as Crory‘s vocal style is certainly reminiscent of Dinah Cancer. This is in no way intended as a shot at the band, as I love me some 45 Grave, and in all honesty, after a few listens to this self-titled EP, I now love me some Tomb Of Nick Cage.

Back to the songs, as I’ve already mentioned Vampire’s Kiss helps usher you into the sound and stylings of the New Orleans based band. Kiss is arguably the most mainstream sounding of the songs, as it would likely be a song you could maybe hear on the radio, well, if radio stations ever played anything good that is. Following up, the band’s first single Nightbreed embraces a more punk-based sound, with the main hook being the title of the song. One thing I particularly like about this EP, is that every song has a completely different feel and sound to it, while also retaining what you could call their “signature sound”.

Tub Of Blood again switches up the sound, going a little more groove based than the previous songs, but still catchy as hell. If you aren’t into it by the time Crory is listing all the body parts she is planning on harvesting from you, then I just don’t know what to tell you. Wrapping things up with Wickerman, the band goes more melodic than any other track on the EP. If you were looking at a track to try and show off to someone who had never heard the band, it’s hard to argue that Wickerman would take that spot. It has a solid groove and as I’ve already mentioned, it’s arguably the most melodic of all of their tracks. To add a funny aside to the review, when the band first sent me the EP, all of the tracks ended up being Wickerman due to a weird computer glitch, so it’s certainly the track I’ve heard the most of by the band.

The Tomb Of Nick Cage have come barreling out of New Orleans with a sound that is different from most bands in the genre right now, and if nothing else, deserve respect for sticking to their guns with the sound. The fact that it all works just adds to the greatness they are throwing out there, and I definitely recommend giving them a shot if you’re looking for something a little different, but also is distinctly horrorpunk.

You can grab your copy of the self-titled EP at the band’s Official Store Page and be sure to give the band a Like on their Official Facebook Page!