Release Year 2015 Track Listing 1) The Light That Was Lost 2) Into The Inferno 3) Voices Of The Night Hailing from Cleveland, Ohio, Blood Shift is a fresh new […] 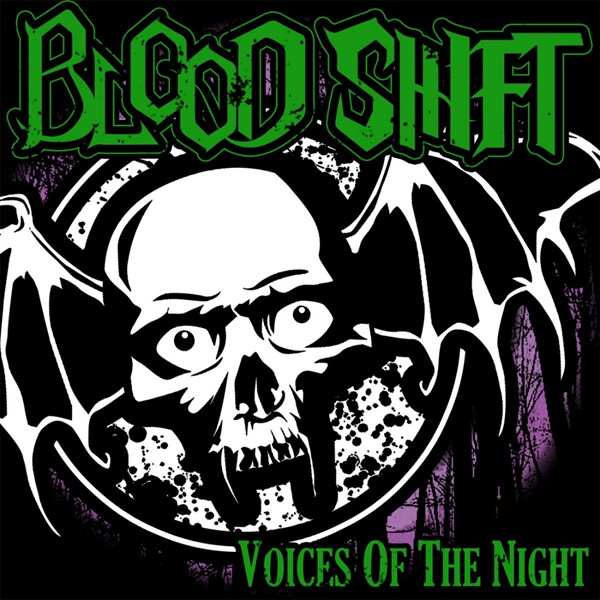 Hailing from Cleveland, Ohio, Blood Shift is a fresh new face in the horrorpunk scene, or as they say, aggressive death rock. Led by guitarist/vocalist Elliot Rosen, the three piece band is also comprised of bassist/vocalist D.B. Hughes and drummer Frank Kordas. The band recently made available their debut EP, Voices Of The Night, through their BandCamp page with the always excellent choose your own price option. Having had the band brought to the attention of The Deadhouse, it seemed appropriate to check out the first 3 songs the band has put together. Of course the question remains of whether or not it is worth checking out for all fans of horror based rock and punk.

Starting with The Light Was Lost, the band comes out of the gate swinging with their very own signature sound. With a strong bass line holding the song together and perfectly complements the gravelly vocals from Rosen. I have to say that the first time I ran through the EP I wasn’t immediately taken by the more aggressive sounding vocals, but on my second and third listens it began to grab me. As I’ve mentioned in other reviews in the past, most bands in the scene generally ape their vocal styles from The Misfits, whether it be Danzig style or even Graves. So the different sounding vocals from Rosen as well as the backing vocals from Hughes, really grow on you, almost to the point where they become permanently attached.

Despite the band’s aggressive death rock claim, only the second track, Into The Inferno, has a more fast beat to it. Both The Light That Was Lost and the title track have more of a slowed down style, but the way that the drums, bass and guitar mend together still gives you a wicked sense of heaviness. To be completely honest, it reminds me a lot of more doom-based metal bands that I used to listen to in my metalhead days. I can’t put my finger on any specific band, but what I can say is that it comes through here as very refreshing as most bands within the hThe orrorpunk genre will usually have a similar sound.

If you’re looking for something a little different than most of what is out there right now within our beloved style of music, I strongly urge you to check out Blood Shift. It may take a few listens, but once it grabs you, it most certainly does not let go. I can happily say that I am really looking forward to whatever the band comes up with next, hopefully in a full-length package, because sometimes, three songs just aren’t enough.

Be sure to grab yourself a copy of Voices Of The Night at the band’s Official BandCamp page where you can get the digital copy on the “Name Your Price” option, or only $3 for a physical copy, and you can’t go wrong with either option. And definitely give the band a Like over on their Facebook page!

Killer Track
The Light That Was Lost