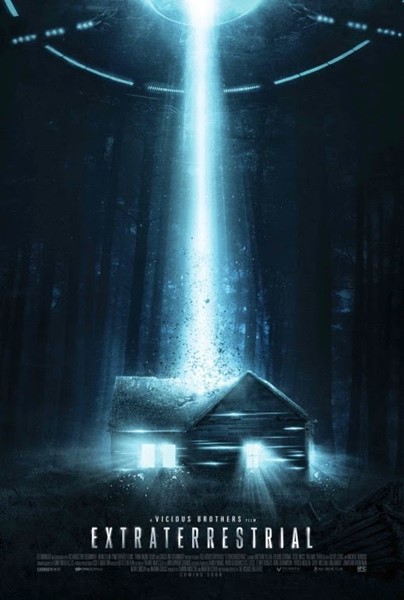 Written By
The Vicious Brothers

Sci-fi and horror have always been a pair of strange bedfellows. Theoretically, no two genres should blend together so well, but it is very rare that it actually works out. Obviously I have always been more of a horror fan and only have a slight interest in sci-fi. Off the top of my head I can only think of Ridley Scott‘s classic 1979 film Alien as the perfect blending of the two genres, with just about every other film that attempts it falling far behind.

The Vicious Brothers (consisting of real-life brothers Colin Minihan and Stuart Ortiz) burst upon the scene with their 2011 release, Grave Encounters. They followed up that release by writing the sequel, but opted to not direct, making Extraterrestrial their next writing and directing effort. Armed with a rather solid young cast and some genre vets, the duo headed out to a cabin in the woods (naturally) to try and put together a legitimately scary sci-fi film.

The film begins with a terrified woman trying to get into a store, but the clerk cleaning inside chooses to not let her in and closes the store. The woman moves to a nearby phone booth, from which she calls 911, before the entire phone booth is taken into the sky. The clerk from the store comes out to find the missing phone booth crashing back to the earth on its platform. We then meet the local Sherriff, played by Gil Bellows (who fills the role of the “I know that guy” actor as he has been in a little bit of everything, but may be best known for his portrayal of Tommy in The Shawshank Redemption) who is obviously baffled by the turn of events, but takes an interest due to some of the other things happening around the town, such as animal attacks and the like.

We then meet our main character for the film, April (Brittany Allen, perhaps best known to soap opera fans for her role in All My Children) who is going up to her parents cabin in the woods to take pictures as they try to sell the place due to their divorce. Her boyfriend Kyle (Freddie Stroma, who appeared in several of the later Harry Potter films) will be joining her, but neglected to mention that he has also invited his friend Seth (the awesome Jesse Moss from Tucker & Dale Vs. Evil and Ginger Snaps), Seth’s girlfriend Lex (Anja Savcic) and their friend Melanie (Melanie Papilia) for a weekend away at the cabin. Along the way they are pulled over by Sherriff Murphy so that the story can tie together later on.

Upon arriving at the cabin, they partake in some of the usual shenanigans that early-20s kids usually do, with Melanie and April taking their dog for a walk, who runs away onto the private property of Travis (genre mainstay Michael Ironside) who used to take April fishing with her father. He fills the role of the creepy old guy who doesn’t trust the government and has suspicions about the recent activities in the area. Following a botched marriage proposal from Kyle that April turns down, the area is overtaken by a strange light, and the group discover a crashed UFO. Upon returning to the cabin, April uses a shotgun to shoot an alien outside of the cabin, who falls dead into their pool. Of course, the group decide to get the hell out of dodge, but as is standard in this situation a crashed log prevents their escape, and Lex is abducted by another UFO. The group heads back to the cabin, while elsewhere in the woods Sherriff Murphy finds what appears to be an abandoned camper, but finds Nancy (the always phenomenal Emily Perkins from the Ginger Snaps series) who informs him that her son and husband have been abducted as was she, but for some reason they let her come back. Upon being informed that people have been being abducted for years, Murphy begins to think of the love of his life, who vanished without a trace a decade before.

The group ends up back at Travis’s place, where he informs them that the alien threat is real. Apparently some sort of treaty had been made, but when April shot the alien, they considered the treat broken and are now out for blood. As is apt in a film of this kind, soon all of the characters are picked off one by one, including a rather nasty shotgun suicide forced upon the character by one of the aliens. After a weird voyage upon the spaceship, including a scene where Seth has some of the aliens experiments forced upon him, the film leads to what appears to be a happy ending. Of course, any good horror film worth its salt never gives into the “happy ending” cliché, and we are given an ending that will surely have conspiracy theorists worldwide enthralled.

I won’t lie, I did not exactly have high hopes for the film going in, and that may have affected my thoughts on the film, but I had a good time watching Extraterrestrial. The cast are all solid for the most part in their roles, and by mixing in scenes filmed on one of the characters phones, it even involves a little bit of a found footage feel, but it works for the movie. Some people may be disappointed by the appearance of the aliens themselves, as they are the generic looking thin white beings with huge black eyes that you would get if you were to ask a child to draw an alien, but again it works, simply because the films focus is more on the human characters and what the aliens do as opposed to the aliens being the focal point.

Gore-wise, the film does well with the few scenes that require it, with the aforementioned shotgun suicide being a standout brutal scene. The inclusion of genre vets Ironside (who really shines as the Vietnam veteran conspiracy theorist who also happens to be a pot farmer!) and Perkins (who sadly is not in the film for more than 5 minutes) helps lend a sense of credence to the film, while also highlighting a young cast that really gives it their all throughout the film. Jesse Moss in particular continues to always be a highlight of any film that he appears in, and I could certainly see a bright career ahead of Brittany Allen as she does a phenomenal job in her role as April.

The Blu-Ray release from Anchor Bay Entertainment Canada contains a few deleted scenes and a commentary featuring both of The Vicious Brothers, joined by two of the film’s stars, Brittany Allen and Melanie Papalia. In addition is a featurette about the making of the film, and of course, as is standard on any release, the theatrical trailer. It is not the most loaded package, but given the surprising quality of the film, it does not need to be, as the main thing about any Blu-Ray or DVD should always be if the film is worth watching. And I assure you, if you like your sci-fi movies to have a nice, healthy injection of horror, then Extraterrestrial will be right up your alley.

Extraterrestrial is currently available in stores everywhere, or you can grab yourself a copy on the revamped (but under massive construction!) Deadhouse Store, which will net you a good horror movie and also help support the site!