Release Year 1977 Publisher Fawcett Publications I’ve always had a keen interest in horror novels that are the basis for horror films, and even those that are novelizations based on […] 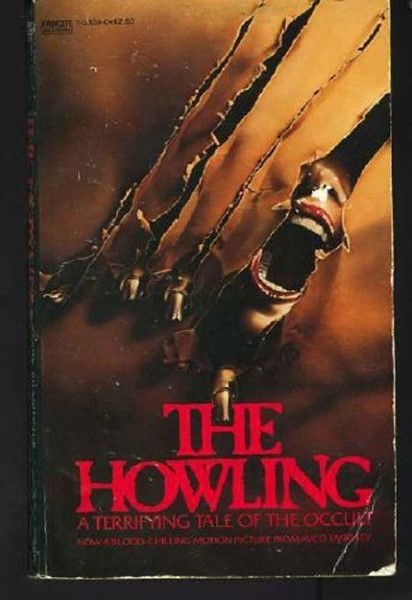 I’ve always had a keen interest in horror novels that are the basis for horror films, and even those that are novelizations based on the films themselves. When I was younger I had a paperback copy of A Nightmare On Elm Street Part 3: Dream Warriors that was based on an early script which was completely different from the film we all know and love. I bring this up to discuss how the books can give us so much more at times than the film, whether it be key differences in the plot or even getting inside some of the character’s heads. In the case of Gary Brandner‘s The Howling, we get an almost entirely different story than what would end up on the screen in Joe Dante‘s 1981 classic. For these reasons, I thought it would be appropriate to take a night to read the book and see how it stacks up.

The Howling tells the story of Karyn Beatty, who as the book begins seems to be living the fairy tale life. She is married to her wonderful husband Roy Beatty and they are expecting their first child. That is, until she is attacked and raped in her home, resulting in a miscarriage and a nervous breakdown. In an effort to help her get away from everything and help her recovery, Roy moves them out into a small village a few hours away from their Los Angeles home called Drago. And if the name alone doesn’t give it away, there is more to the small village than meets the eye. Shortly after arriving the couple leaves their dog Lady outside as they attempt to make love, which they continually have problems with following Karyn’s rape. Unfortunately for Lady, this is her exit from the story as she goes missing, until Karyn stumbles across her severed head in the forest several weeks later. While Karyn attempts to assimilate into life in Drago and its very few inhabitants, Roy begins to become more and more distant, all while becoming infatuated by Marcia Lura, another resident of the village. Soon enough Karyn realizes there is something going on, and with the assistance of a new friend Inez Polk from the neighboring town of Pinyon, werewolves become the suspect. Things continue to escalate until a final showdown takes place between the wolves and Karyn.

One of the greatest compliments I can pay to author Gary Brandner is how smooth and easy of a read he has created with The Howling. Once I started reading the book it was very rare for me to put it down. Brandner‘s style of writing keeps the story moving at a brisk pace, and even when the story has to slow down to set events in motion for later in the novel it never feels like you’re moving through a section that is just filler.

All that said, there are problems. Much like many older horror novels I’ve come across, the ending feels rushed and in many ways anticlimactic. It feels like as soon as the final battle is about to hit a crescendo it just ends. The book spends most of it’s duration building towards the big finale, and it all happens in roughly 10-15 pages. By no means am I implying that it should have been dragged out to add to the word count, but it just feels like a little bit of a let down.

Another odd stylistic choice is in how graphic Brandner details the sex scenes, but the descriptions of violence seem lackluster. Almost every time a person falls victim to a werewolf attack, it involves the lycanthrope taking a chunk out of the victims throat. It’s very similar to how in the 2009 remake of Friday The 13th so many of the kills are simply throat slashes. You have the reader engrossed, why not have a little fun and mix it up?

In the end, The Howling is a fast enthralling read, but not one without it’s problems. Most horror fans likely don’t even know of the novels existence, but it has it’s place in history simply for inspiring one of the most important werewolf films of all-time. Hell, it was the work that Joe Dante did on this film that reportedly landed him the job directing Gremlins which of course launched his career into the stratosphere. On that basis alone the book should be respected. If you are able to get your hands on a copy it’s certainly worth the few hours it takes to enjoy it.