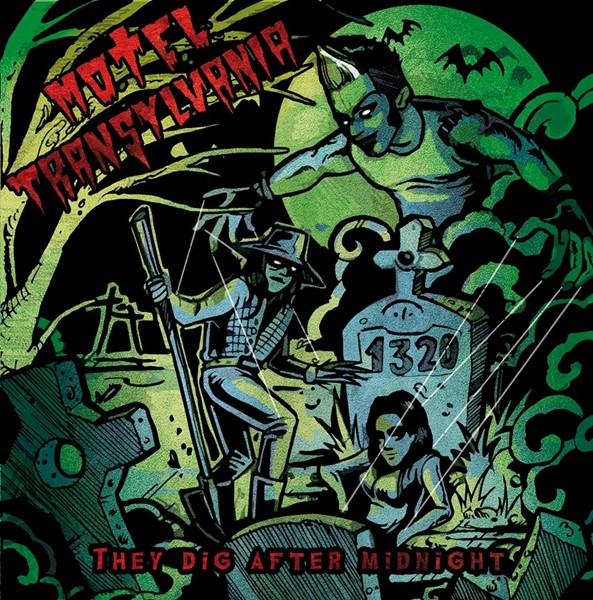 I have been lucky enough to have built somewhat of a relationship with Undead Artists, a record label based in the UK with a strong focus on horrorpunk. Given what The Deadhouse is all about, it’s quite obviously a perfect pairing. In the past we’ve covered releases by bands like Lupen Tooth, Dr. Hell and Raizing Hell among others, and now we are looking at the label’s newest release by Italian band Motel Transylvania. And don’t worry, this isn’t some awful Adam Sandler attempt to ruin all our favorite movie monsters, but one hell of a horrorbilly record!

Longtime readers and anyone who knows me personally knows I am not particularly fond of the psychobilly or rockabilly or whatever the hell you want to call it sound. I generally find most bands in the genres sound identical, and besides the likes of Bloodsucking Zombies From Outer Space and Kitty In A Casket, there are few bands I can say I genuinely like. So when I receive a new album submission for review on the site and I see that a band identifies itself with the “whatever-billy” sound, I am generally a little hesitant to throw it on. Of course, every band that comes through and offers its work for submission deserves a fair shake, and I do my absolute best to go in and judge every album on its own merits.

As is damned near standard now with any horror-based album, we begin with a musical intro featuring a Bela Lugosi sample that kicks things into high gear with the first real taste of what Motel Transylvania brings to the table with Go Psycho! Much like the similar (and awesome) Bloodsucking Zombies From Outer Space, the band features a vocalist also working the stand-up drums, in this case, T-Ghoul. On guitar and backup vocals is The Wolfman, with the band being rounded out by Fish “The Scarecrow” handling bass duties, as well as additional backup vocals.

Through the aforementioned Go Psycho! and the titular track Motel Transylvania, you get the exact vibe that the band is going for and know you are in for a fun time through all the tracks presented here. Sometimes you just need a band that is fun and you can unwind and just bang your head to, and Motel Transylvania do a perfect job being a band that can fit that bill.

With Summer In The Grave the band slows things down a bit but picks it right back up with the sample-heavy tribute to the George A. Romero classic Night Of The Living Dead. The band cools things off once again towards the end of the album with It’s Not So Bad, leading to the final track, I Wanna Be Your Ghoul. Far and away my favorite track on the album, Ghoul is somewhat of a morbid love track and is the perfect ending to an album that announces that Motel Transylvania is a band to keep an eye on, and one that certainly has a bright future.

Be sure to like Motel Transylvania on their Official Facebook page and you can keep an eye out for more information on the band on the Undead Artists BandCamp page!

Killer Track
I Wanna Be Your Ghoul

One thought on “Stereo Terror: Motel Transylvania – They Dig After Midnight”