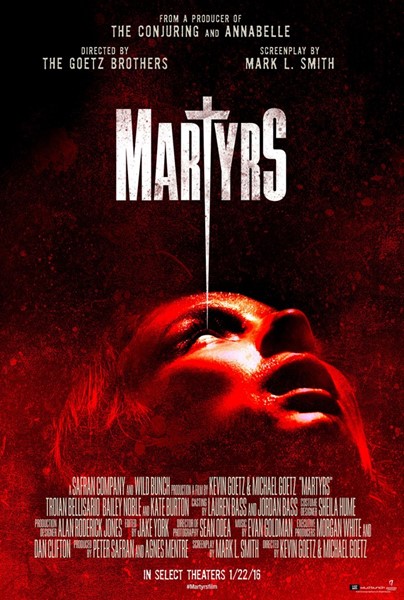 In 2008, a small film out of France took the horror world by storm. Written and directed by Pascal Laugier, Martyrs became an instant cult classic amongst gorehounds. Given that the film became somewhat of an underground phenomenon, it was inevitable that an Americanized remake would come to fruition. After having been rumored for years, we now have that film. Of course what really matters is if directors Kevin and Michael Goetz are able to put their own spin on a film beloved by the horror community while staying true to the original film.

Once I became aware that I would be receiving and reviewing Martyrs I strongly contemplated going back and watching the original film to refresh myself on the story, but in the end I decided it would be best to not do that and come into the 2015 version of the film with an open mind to be able to fairly judge the film on its own merits.

Martyrs begins with young Lucie (Ever Prishkulnik) escaping a warehouse where she has been held and tortured. She is taken in by an orphanage but is plagued by nightmares and visions from her time in the warehouse. She becomes friends with another young girl at the orphanage named Anna (Elyse Cole). Anna is questioned by the head of the orphanage and the sisters to find out if Lucie ever gives her more details regarding the “monsters” that she sees and fears. Years later, we m dieove to a family having breakfast and discussing household chores. The father (Blake Robbins) asks his son (Taylor John Smith) to assist him with some work in the basement, leading the son to complain that his sister (Lexi DiBenedetto) always gets away with not having to help as much. Dad goes to answer the door after the doorbell rings, and is greeted by a grownup Lucie (Troian Bellisario) who immediately blows him away with a shotgun. Lucie makes her way to the kitchen and shoots the mother (Romy Rosemont) followed by the son after a brief conversation asking him if he was aware of what his parents had done.

Once Lucie has eliminated all the family members she makes a phone call to Anna (Bailey Noble) who comes to be at her friend’s side. Anna is shocked when she arrives to see that Lucie has murdered the family, believing that once they located Lucie’s torturers they would call the police. Even after the murders, Lucie is still haunted by a demon-like creature (Melissa Tracy) that attacks her at random. Anna finds Lucie being attacked by The Creature but we discover that it is all in Lucie’s head, so her friend only sees her smashing her own face into a table. Lucie attempts to kill herself by falling over the railing to the floor below. After getting Lucie asleep on the couch, Anna attempts to bury the family outside, and soon finds a hidden passage to the torture room that young Lucie spent so much time in. To discuss the plotline further would be entering into spoiler territory, but things do get messy at points to say the least.

The 2015 version of Martyrs follows the 2008 original very closely in terms of story and progression. In the end, the main difference between the French original and the new Americanized remake is the level of brutality. While one would be foolish to have expected a film as unrelentingly harsh as Laugier‘s film, the new Martyrs plays it safe in nearly every regard. If one was to think of the new version as a watered-down version of the original, it becomes a much easier to swallow pill. The direction by the brother team of Kevin and Michael Goetz is satisfactory, and if the choice to shy away from the harsh brutalities inflicted upon the characters was made by them or not, they do their best at attempting to take the film into a position of leaving some of the harsher torture to the viewers mind instead of baring it all on the screen.

For the more casual horror fan who may not be as familiar with foreign horror, this new version of Martyrs could certainly be viewed as a decent film at best. There are certainly worst films out there that you could waste 90 odd minutes on. But if you are a more hardened fan, and have seen the original, then you may want to take a pass on this Americanized version of Lucie and Anna’s story.

As always, despite the quality, or lack thereof, of the film, Anchor Bay has provided fans with a stellar release. The Blu-Ray version provides viewers with a top-notch video and sound quality, as well as subtitles in English and Spanish. The release features one lone special feature, that being a “First Look” at the new Martyrs. At a brief 8 and a half minutes, the first look is your standard fluff piece with interviews including Bellisario and Noble, the Goetz brothers directing team and Executive Producer Dan Clifton.

You can pick up yourself a copy of the new Martyrs on Blu-Ray or DVD now at all available retailers, or you can grab a copy from The Deadstore to help support this site as well by clicking here.