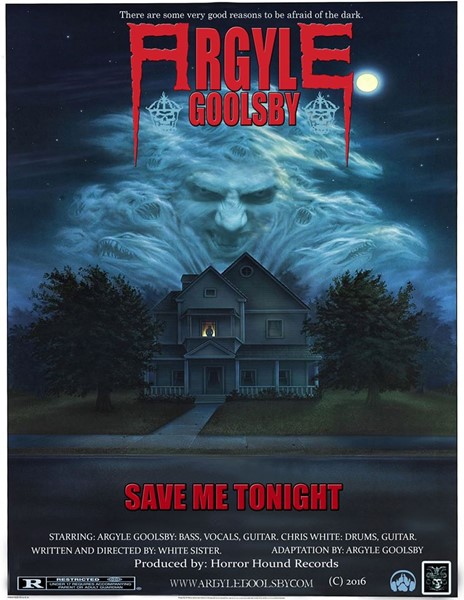 Argyle Goolsby should absolutely need no introduction to anyone visiting the site. Anyone who knows me either through the site or in real life knows that Blitzkid is my all-time favorite band. I have obviously followed what the band has released since the end of Blitzkid. The former bassist and vocalist for Blitzkid has now gone out on his own, ad put together a new band, Argyle Goolsby And The Roving Midnight, which includes a rotating set of members, but some luminaries to mention would be former Blitzkid drummer, Stripes, the mastermind behind Shadow Windhawk And The Morticians, Shadow Windhawk himself on guitar and vocals, as well as others such as Emilio Menze from Stellar Corpses. In short, it kicks ass.

With this cover of the White Sister song Save Me Tonight, Goolsby absolutely nails the 80’s rock song in a horror movie tone, truthfully, even better than the original song. Check out the song through the YouTube video included below, and feel free to discuss what you think about the song either on the comments, or on the Official Facebook Page for The Deadhouse. You have liked the page, haven’t you?

I have reached out to some contacts regarding getting my hands on the full album from HorrorHound Records in order to review, as well as to Goolsby himself, and will update this post accordingly!

One thought on “DeadTube: New Argyle Goolsby Cover From HorrorHound Records “It’s Only A Movie””