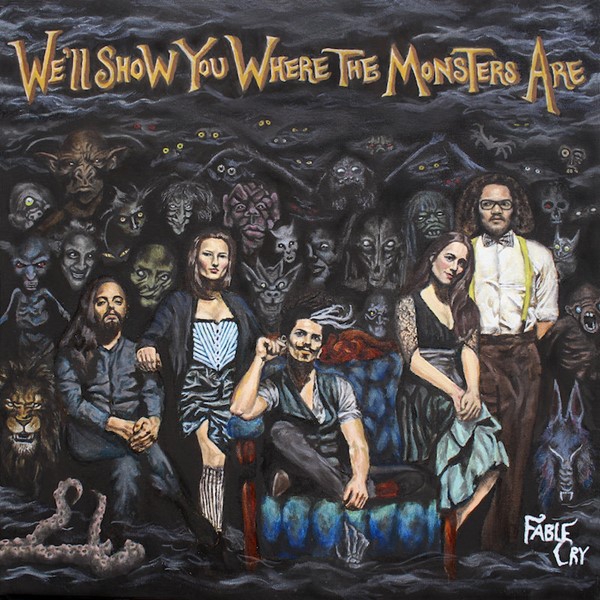 Having recently been introduced to Fable Cry, I can assure you all that this is one band that is certainly bringing something different to the table than many of their horror-based musical contemporaries. Truth be told, after listening to the Nashville-based band’s most recent album, We’ll Show You Where The Monsters Are, I’m still not entirely sure how to describe the band and their music.

Right from the opening seconds of Onion Grin you enter into the strange and unique world of Fable Cry. While most horror bands will frequently use the word ‘theatrical’ to describe their sound, Fable Cry take the term to a whole new level. As much as I do not personally care for the Danny Elfman style of scoring, you can certainly hear the influence of Elfman mixed in with horrorpunk that equals to what the band themselves refer to as “theatrical scamp rock”.

While I would be hard-pressed to describe what scamp rock is, I can assuredly say that the music of Fable Cry would have fit into films like Repo! The Genetic Opera or it’s spiritual successor The Devil’s Carnival. Beyond the unique sound presented, another aspect of the band that anchors their work is the vocals of front man and guitarist Zach Ferrin. Ferrin‘s range bounces over every spectrum imaginable to help match the songs throughout the album, and are also aided by backing vocals from Jo Cleary, who also handles violin duties for the band. Throughout the album there is really no way to tell what the band is going to present next, leaving the listener in an intriguing place. Just as you feel you can maybe pinpoint what the band has up their sleeves after songs like Dead Or Alive (For Now), which is also the first single from the album and the utterly fantastic From Myth To Moon, you are thrown a curveball.

Other highlights from We’ll Show You Where The Monsters Are include Fancy Dancing and the band’s epic ode to everyone’s favorite mad scientist Frankenstein, The Good Doctor. If you are looking for something a little on the different side with your horror-based music, then you could certainly do a lot worse Fable Cry.

Be sure to head over to the Official Fable Cry website to learn more about the band and check out the store there to get your hands on We’ll Show You Where The Monsters Are as well as other merch the band has available. You can also check out the Fable Cry BandCamp page and be sure to like the band on Facebook to stay updated on everything the band has to present.

Killer Track
From Myth To Moon