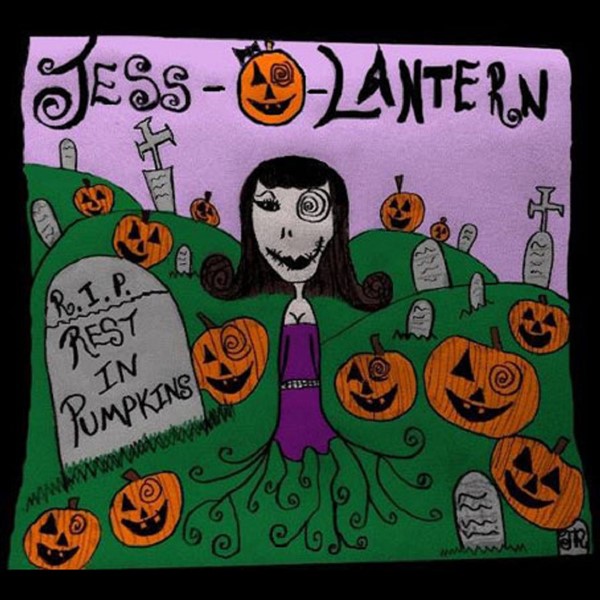 Acoustic horrorpunk has seen a bit of a renaissance as of late, thanks to bands like Wolfman Chuck, The Mutant Members Only Club and The Bastards, and a new voice has emerged into the scene with a different take on the genre. Steadily releasing new music for several years now, Jess-O-Lantern released her first full-length LP back in 2016, packing 12 great tracks to assemble Rest In Pumpkins. The question remains, with so much good horrorpunk in all of its different forms out there, is it worth taking your time to check out the album?

An infectious feeling of love and energy comes through to the listener throughout the entire album, and “Corpse Revival” is the perfect kick off song for the album. The song segues into “Mr. Skeleton” which I think may be one of the best representations of what Jess-O-Lantern is trying to achieve with her sound. The song is upbeat, catchy, and just sounds great all around. “Beliefs” continues the faster stream of music and is another catchy song, leading into “Howl’s Revenge” where we get a tale of werewolves, which every great horror-based album needs.

The pace finally slows five tracks in with the gorgeous sounding “Bated Breath.” One of the strongest traits that is evidenced throughout both this album and her other releases, is that Jess may have one of the most stunningly beautiful voices in the entire genre. The choice to have this beautiful ballad in the middle of the album following the faster tracks is a bold one, but it pays off wonderfully. Every great album has a song on it that makes the listener stop, and throw it on repeat because it resonates. For me personally, “Bated Breath” is one of the saddest yet empowering songs I’ve heard in quite some time. Whether or not you decide to check out Rest In Pumpkins as a whole, I cannot implore you enough to check out this track.

Following such a beautiful track is a tall order, and while it does not reach the same peak as the previous song,” Little Dead” continues the slower feel and is another showcase for Jess’s vocals. “Miss Monster” picks things back up before “Lost, Boy” throws out another curveball sound wise. To be honest, from the opening notes I thought I had switched over to a track by the aforementioned Wolfman Chuck. “Feel Good Horror Movie Of The Year” continues the same sound and things remain rather mellow throughout the final portion of the album, wrapping up with another fully acoustic track in “Into The Dark.”

While Rest In Pumpkins hits the peak halfway through with “Bated Breath,” which I really cannot speak highly enough of, the album as a whole is certainly a great piece of the horrorpunk genre puzzle. Seeing as Jess-O-Lantern has already continued to release music on a steady basis, I predict that she will continue to be a big part of the scene through 2017 and beyond. If you are a fan of the acoustic style, or female vocals, you absolutely need to check out not only Rest In Pumpkins but her entire discography!

Be sure to follow Jess-O-Lantern on Facebook to stay up to date and head over to the Official Jess-O-Lantern BandCamp page to pick up Rest In Pumpkins and the rest of her work!