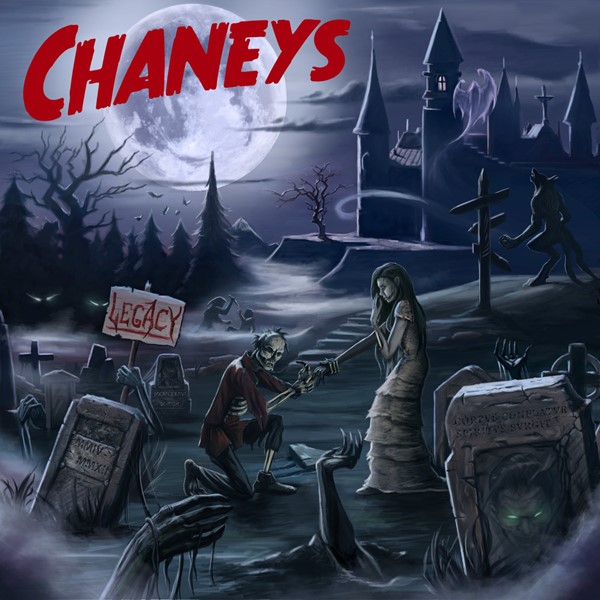 Well, Russia is all the rage these days if you pay any attention to the political spectrum and news channels, but fuck that noise for now, and let’s check out some horrorpunk noise from Russia! Chaneys were formed on October 31st, 2017 (my 32nd birthday just for the record) and back in October of 2018 they unleashed Legacy, six tracks of their take on horrorpunk.

“Lycanthropia” goes a little longer than the previous tracks, as the band continues building upwards in momentum. Add in some great guitar work and we get another good track, although it doesn’t click quite as well as the previous song. “The Vow” starts with a slower build-in and the song has some great guitar work once again. It goes for a more epic feel, but unfortunately falls short somewhat. In a strange twist, it starts to actually click towards the end, but the prior choruses just seem a little off in comparison.

“Farewell” begins fast and stays that way, reminding me almost of a pop-punk song you would have heard circa 2001, except with lyrics about murder. I can’t stress this enough, I mean this as an absolute compliment. The group recalls a little bit more of that catchiness from earlier in the album, and this is one sure to enter your rotation. The album comes to a close with “Like A Wolf” which yes, is another track about lycanthropy. This one fares much better than the earlier entry, building to a great crescendo, and is undoubtedly one of the stronger tracks on the album.

Overall, there is definitely more good than there is weaker tracks on Legacy, and the potential that Chaneys has going forward is certainly great. I’ll be keeping an eye on things as the future approaches, and am looking forward to what the group comes up with next.

You can grab your copy of Legacy at the Chaneys Bandcamp page and be sure to give the band a Like on their Facebook page!