Skip to content
Stereo Terror: The Jasons – Blood In The Streets
Horror

Stereo Terror: The Jasons – Blood In The Streets

The Jasons have been kicking around the scene for about half a decade, and sadly for several reasons have been labelled a gimmick band. Whether it be the look, the insistence on working their songs around themes from the Friday The 13th series, or even the masterfully done Get Sued album where they blended Ramones songs with Misfits lyrics, the band has never really been given the credit they rightfully deserve. 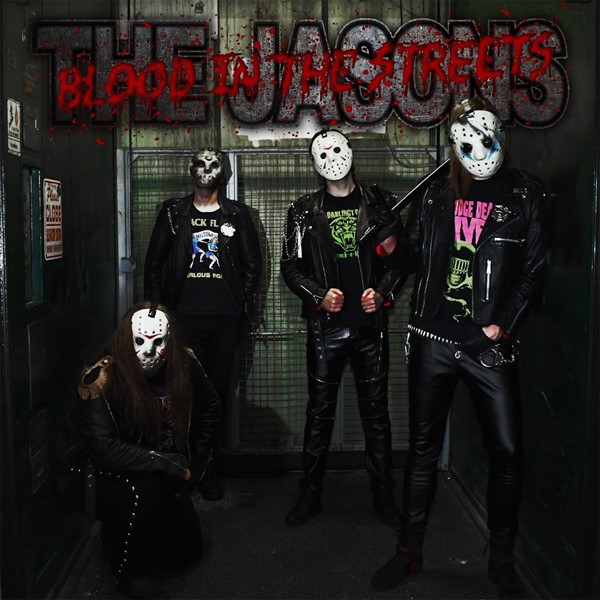 The Jasons have been kicking around the scene for about half a decade, and sadly for several reasons have been labelled a gimmick band. Whether it be the look, the insistence on working their songs around themes from the Friday The 13th series, or even the masterfully done Get Sued album where they blended Ramones songs with Misfits lyrics, the band has never really been given the credit they rightfully deserve. But with Blood In The Streets, that all changes. With this album, while still working in so much of what has made them who they are, they show that they are red-blooded American punk rock, and they do it with style.

The album opens with the title track, and it’s an incredibly catchy (be ready, you’re likely going to hear that phrase a lot when it comes to this album!) anthem. It sets the tone for the rest of the album perfectly, and lets you know that the guys aren’t fucking around here. “Kay-Em 1” is a love-song tribute to everyone’s favorite android from the criminally underrated Jason X. If you can listen to the chorus without at least smiling, you are a much better person than I am. “Scene Police (Static)” follows and is a big middle finger to all of those who think they know how the scene is supposed to be and judge everyone else based on their ideas, and immediately stands out as it is one of the few tracks on the album not immediately tied to the Friday series.

“JJ Was A Headbanger” is another banger (phrasing!) dedicated to the titular JJ, one of the few good characters in the worst Friday sequel, Jason Takes Manhattan. At this point I feel I should throw some credit to the band, consisting of lead singer/lead guitarist Jason V, bassist/backing vocalist Jason 3D, drummer/backing vocalist Jason Hell, and lead guitarist/backing vocalist Jason R (or Hollywood if you’re nasty). The vocals from Jason V are one of the driving forces of the band and are perfectly accentuated by some of the finest gang vocals I’ve ever heard. A great example of this can be heard on “It’s Still Crystal Lake To Me (No Matter What They Call It In Part 6).” Evidently, much like Jason Voorhees himself, the band were not fans of Crystal Lake’s renaming to Forest Green in Jason Lives. Another curveball follows on “No Motivation” a sub-minute throwdown with driving guitars and gang vocals.

“Dead Fuck” is an ode to Crispin Glover’s Jimmy from The Final Chapter. One of the funniest tracks on the album, and sure to be a live staple with some great crowd participation. If the band ever makes it up North of the border again I look forward to doing the Dead Fuck dance myself along to the song! “Red-Blooded American Punk Rock” follows, and I’m not sure what to say about this song other than how incredible it is. This is the type of song that should be a breakthrough track for the group. Not only is it one of the best songs on the album, it’s one of the best goddamned punk rock songs I’ve ever had the pleasure of listening to. How do you follow up such a killer song? With an unexpectedly great ballad dedicated to the lovely Vera from Part 3. “Vera (I’m So Sorry)” is once again ridiculously catchy and is much like an extension of the band, showing they can bust out any type of song they want and make it work. Staying on the Part 3 kick, “Chili Is A Stoner” picks the tempo back up leading into Jason 3D getting some Ramones jeans. The late album highlight is by far the telling of the tragic tale of Mark from Friday The 13th Part 2, as his legs don’t work, and the poor guy famously ended up with a machete to the face that resulted in one of the most comically entertaining moments in any movie I’ve ever seen. The band pays amazing tribute to the poor guy with a great killer song. The album closes with the ludicrously titled “I Jacked Off (To Dee Dee Ramone)” which is good fun, but I feel like the album could have ended with “Mark’s Legs Don’t Work” and been just fine.

The Jasons have come such a long way, both in songwriting and production since their earlier works, far surpassing any expectations people had for a shelf life of a bunch of hockey mask wearing punk rockers. Blood In The Streets shows the growth of the band and proves they definitely know what they are doing, and it may just be the best horrorpunk album to hit so far in 2019.

Head over to The Jasons BigCartel page to get your copy of Blood In The Streets as well as some other great merch, and be sure to hit the Like button on The Jasons Facebook page to check out their upcoming tour dates and stay up to date on all the latest news!